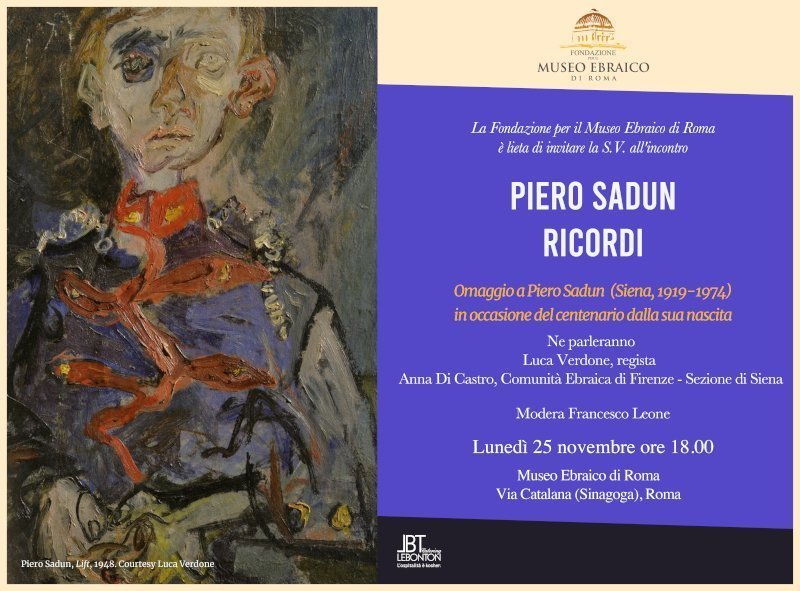 Piero Sadun, a Jewish painter from Tuscany, was born in Siena in 1919.
His father, Giacomo, was a trade representative in the food sector, who had been registered with the National Fascist Party since 1932, and as a volunteer in the First World War, was awarded the Cross for Merit in war.
In the mid-twenties, the Sadun family bought a property in the countryside around Siena, along Vignano road, where they built a house called ‘ Vallone’ -which means ‘big valley’- not far from Cesare Brandi’ s family villa.

After the war, in 1945, Piero moved permanently to Rome, but Siena remained the city of his artistic vocation and intense friendships that accompanied him throughout his life and fuel his education, like the one with with Mario Verdone.
In the summer 1938, with the promulgation of racial laws, Jewish students were expelled from schools of all levels. Piero Sadun, who was enrolled in his last year of high school, was obliged to end his studies by preparing privately for the high school exam.

Due to the impossibility of continuing his artistic studies in the academic environment, he spent a period of training in Florence: he had initially been accepted in Conti’s studio but soon interrupted the relationship with the artist, who took him away as a Jew. He then continued his apprenticeship with the painter Memo Vagaggini, however, due to the racial laws, he was banned from public activities and excluded from all exhibitions promoted in Siena.
In 1939, Sadun and his family came into contact with Mario Bracci, a professor of administrative law and the only teacher at the University of Siena who was not a member of the National Fascist party.

Bracci created a “client” relationship with Sadun and decided to support his artistic production nonwithstanding the ongoing racial campaign, so as to entrust him with the fresco decoration of some rooms in the farm of Pontignano, which was the first opportunity for the Sienese artist to challenge himself with the theme of fresco.
Since 1940, and until the end of the war, all of Sadun’s works had been signed with the pseudonym T. Duna.
Piero was in Siena when, after September 8th 1943, a move from persecution of rights to persecution of lives took place for Italian Jews. The dramatic winter of 1943-44 had began for him and his family members, and it subverted their lives.
Piero remained in Pontignano until 1943, year in which the raid and deportation of the Jews by the fascist republicans, helped by the Germans, took place also in Siena.
By the end of October, the family had already been split and supported by the help of don Luigi Rosadini, a pastor of the curia of Vignano.
The months following his escape from Siena were mostly spent hiding in Castiglion Fiorentino, and were marked by anguish and forced solitude.
An intense letters exchange with Cesare Brandi gives us some fragments about those months of clandestinity, before Piero actively joined in the partisan experience.

After September 8th, indeed, Sadun made his mind about taking part in the partisans and, since March 1st 1944, he had been a placed in the 2nd “Favalto” Battalion of the XXIII Pio Borri Brigade.

Since the beginning of March 1944, Piero was in Marzana, in the high Tiber Valley, in a hospital that took care of injured partisans, which was then converted into a concentration camp for German and fascist prisoners who were captured in war operations.

Sadun was in charge of the camp together with Dr. Gottschalk, a Jewish doctor, and his wife Irene Rocca, secretary and nurse.
These three months that Piero spent in the mountains until the liberation, in July 1944, saw him as a witness to death and atrocious destinies. However, he continued to defend – even in the treatment reserved for German and fascist prisoners- the dignity and respect due to every human being.

The dramatic events involving his family and himself as Jews, marked a turning point in his pictorial production, which is inextricably linked to his vicissitudes of life.