“My story begins in Livorno, the city where I was born and where I learned how to be a rabbi.”

The Jewish community of Livorno, which was formed in 1593 with the invitation to populate the city from Ferdinando I de ‘Medici to “all merchants from any nation”, in order to make it a great port, boasts a history that places itself among the most lively in Italy. At the beginning, villains coming from Portugal settled in there, followed by Greek, Armenian, Turkish, African, French and English merchants and craftsmen who gave life to that cosmopolitan environment, which is typical of the modern age Livorno. This atmosphere has no equals, with the exception of the Ottoman city Smyrna. By 1800 the Jews, who according to the Grand Duke’s invitation did not live in a ghetto, reached the number of 5,000.

In the religious field, they stood out for their openness to intellectual exchanges and for the spread of the kabbalistic culture, brought by Levantine and North African masters such as Moshe Pineiro and Hayyim ben Hattar. In 1915, while Livorno was keeping some features of its past splendor, Elio Toaff was born.The person who introduced him to the faith and rituals of the Jewish religion was his father Alfredo Sabato Toaff, Chief Rabbi in Livorno and director of the Rabbinic School, which Elio attended becoming a rabbi in 1939. Alfredo Toaff had been a pupil of Elia Benamozegh, the last representative of the Kabbalistic tradition in Livorno, who directed him towards a lifestyle centered on asceticism, prayer and study. Thus, even in the worst moments of the war, Alfredo Toaff never abandoned reading the Talmud, while his son Elio, who was a refugee in Fabriano, wrote a prayer book in 1943 in Sephardic Hebrew characters. In 1935 Alfredo Toaff was also responsible for the Italian translation from English of the anthology of the Talmud by Abraham Cohen, in whose introduction the rabbi reiterates the need to deepen “the cornerstones of esoteric Judaism”. In 1909, together with Aldo Lattes, Alfredo Toaff was author of the work Gli studi ebraici in Livorno nel secolo XVIII: Malahi Accoen (1770-1771). Alfredo was a pupil of Giovanni Pascoli at the University of Pisa, where the poet was a professor of Latin and Greek grammar, and also a well-known Greek language and literature teacher in Livorno. However, rather than studying purely literary texts, since his degree thesis dedicated to the origin of the legend of Nebuchadnezzar, he turned his attention to historical and religious texts, which were useful for the reconstruction of the history of Jewish people. Thus, anticipating the interests of the great scholar of antiquity Analdo Momigliano, a Piedmontese Jew, the Livorno-born Toaff showed that he was well aware of the need to look into the history and culture of Israel with a broader perspective.

In the same years in which he was a pupil of the Rabbinic School in Livorno, Elio Toaff attended the Faculty of Law at the University of Pisa. The University was characterized traditionally by a significant Jewish presence, both among teachers and students. The case of Alessandro D’Ancona, who in 1861 was hired to teach Italian literature, is emblematic, while in 1887, the “Israelite Banner” indicated the Pisan University as the one with the highest number of Jews with a teaching post throughout Italy. In 1938, with the enactment of the racial laws wanted by fascists, the situation changed radically: Jewish professors were “released from service”, while the Italian students of “Jewish race”, who were regularly enrolled were allowed to reach the end of their own studies. Among them, there was Elio Toaff, who managed to graduate in July 1939 with a thesis in Commercial Law entitled: Commercial companies in Palestine. In Pisa Toaff attended the house of Giuseppe Pardo Roques, the president of the local Jewish Community who, as a true “philanthropist and patron”, used to welcome foreign and Italian Jewish students, who in his rooms could freely exchange their political opinions.  In August 1st 1944, Pardo Roques, who was denounced to a patrol of German soldiers by a neighbor, together with some Jewish guests and non-Jewish service personnel, – as Elio Toaff writes in his autobiography Perfidi Giudei, fratelli maggiori – “suffered an atrocious martyrdom for having believed in men”.

After graduating, by following the example of his brothers Renzo and Cesare, Toaff was tempted to move to Palestine, but his father convinced him to stay. Elio became Rabbi in Ancona in June 1940 while Italy entered the war. After his marriage to Lia Luperini, celebrated in Florence on 29th October 1941, he kept his commitment in the Italian and Levantine Synagogues of the city in the Region of Marche, and he also dedicated himself to the rearrangement of the library, archive and furnishings, which were sacred for the community. But, after the armistice between Italy and the Allied Forces, signed in September 8th 1943, events got worse. In early October the Germans entered Ancona, and Toaff with a choice of great wisdom, which was not understood by everyone, decided to close the Synagogue on the day of Kippur. The facts showed that he was completely right. After taking refuge in Fabriano, he led a life dedicated to prayer and study, but remained fully involved in the suffering of the population of Ancona, which was tormented by the bombings.

The desire to gather with their family members soon led the young couple to leave the Marches for Tuscany. They reached Pisa and, often on escape, found refuge in Orciano, Focette, and Valdicastello where Elio entered the Resistance movement. Being in charge of some risky actions, he showed readiness and cold-bloodedness, and managed to escape the shooting, being the only one of a group of locals and partisans captured by the Germans at dawn in August 7th, 1944. Five days later, there was the massacre of Sant’Anna di Stazzema, where Toaff was among the first witnesses of the bloodbath carried out by the SS. After the experience of the war, it was time for reconstruction. Back in Ancona, Toaff discovered that the community had been forced, for economic reasons, to fire him. However, he did not leave his post, but committed himself to assisting refugees and continued to teach Greek. Alfredo Toaff, a pupil of Pascoli and Benamozegh, had trained a great rabbi.

In 1946, appointed Chief Rabbi in Venice, Toaff spared no effort to change the fate of the local community, which had been severely hit by the war. Among other things, he measured himself with intricate Jewish law issues – in order to solve cases created by the difficulty of following religious rules during the terrible years of racial laws and the Shoah – always showing, in addition to an in-depth knowledge of texts and customs, a unique ability to understand human passions and feelings. Continuing in the work of safeguarding and spreading Jewish culture and traditions, which began in Ancona, Toaff established the Jewish Museum in Venice, and taught Hebrew language and literature at Ca ‘Foscari University. He was also active in organizing illegal immigration to Palestine, even managing to smuggle a tank into the future state of Israel, which had been given to him by a farmer in whose field it was lying abandoned. In the Middle Eastern environment, the tank found itself living together with the caterpillar tracks that began to till the soil to be used for cultivation. Toaff then sent the interiors of the ruined Synagogue of Conegliano Veneto to Jerusalem, which today is house of the religious services of the Italian community. 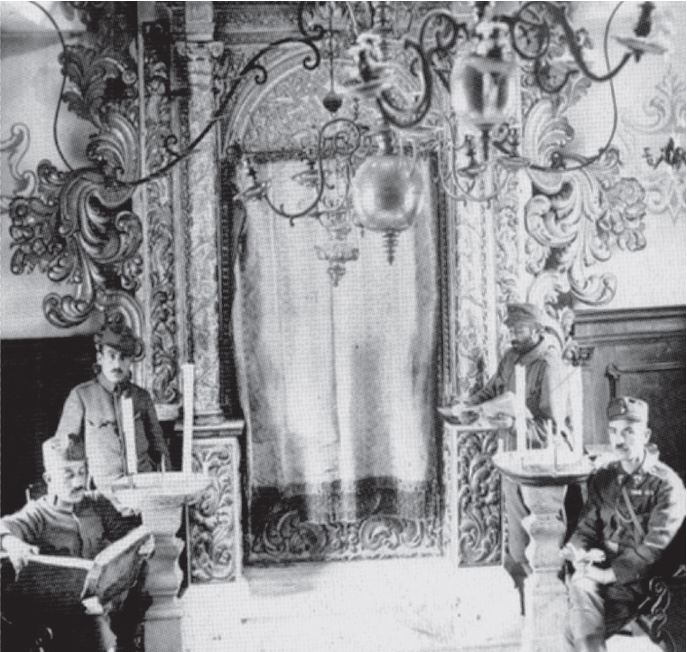 Throughout his half century of teaching, after having led his community definitively out of the anguish of racial discrimination and war, Toaff gave decisive impact on the development of institutions that are still fundamental for the Jewish today’s life in the city: schools, youth movements, support organizations, the museum. His pecial care has always been directed towards family and the maintenance of harmony within it, by offering attention, despite his numerous commitments, to all those who asked for his help and advice. As director of the Rabbinical School, and certainly mindful of his father’s teaching, he has contributed to the education and training of the new rabbis. In the vast world of Jewish knowledge, he has been committed with passion, but also with the  required by the topic, to the deepening of the Kabballah.

Toaff also looked with interest into the world outside the Jewish community, showing a marked ability to understand the often-abrupt political and cultural changes of our contemporary society, without ever forgetting his origins and identity. With him, the Jewish Rome has become a respected interlocutor with Italian, local and national institutions. Contacts with the state of Israel, founded in 1948, have been continuous: the Great Synagogue has welcomed Abba Eban, Golda Meir and Moshè Dayan among its visitors. In 1982, a wave of anti-Semitism following the Lebanon War originated the Palestinian attack of the Great Synagogue, in which the little Stefano Taché lost his life and many observant people were harmed. This was a terrible test which, after an initial moment of distance, Toaff faced with great firmness and diplomacy, finding in the President of the Republic Sandro Pertini a courageous interlocutor. The relationship with the Quirinale became personal when Carlo Azeglio Ciampi, a friend of Toaff since the time of Livorno, was elected president of the Republic.However, it is in the area of the dialogue between religions that the figure of the chief rabbi of Rome stands out with its greatest emphasis. Toaff is, indeed, one of the great representatives of Judaism who participated in the dialogue between Jews and Christians with passion and commitment, not only through reflection and study, but also through actions that reached their peak in Pope Giovanni Paolo II’s visit at the Synagogue in Rome in 1986. An event that still lights the complex path of relationships between Jews and Christians. Toaff can well be said to be the heir of the rabbi that Gotthold Ephraim Lessing met in Livorno during his trip to Italy in 1775, and who he chose as model for his Nathan the Wise, the main character of the homonymous masterpiece dedicated to the theme of brotherhood and affinities between Jews, Muslims and Christians.

Up:
The interior of the eighteenth-century synagogue
of Conegliano Veneto with some soldiers of the Austro-Hungarian army, Yom Kippur 1917.
On the initiative of Elio Toaff the building was moved to Jerusalem in 1952. Located at the U. Nahon Museum, the synagogue of Conegliano Veneto
today it is a place of worship for the Italian Jewish community.
Pictures Museum of Italian Jewish Art U. Nahon,
Jerusalem
In the center:
The settlement in the Tempio Maggiore
by Rav Elio Toaff, Rome 4 August 1951.
Behind him the father Rav Alfredo Sabato Toaff, followed by the Rabbi of Milan Ermanno Friedenthal and the Rabbi of Turin Dario Disegni.
Next to:
John Paul II and Rav Elio Toaff, between Rabbi Vittorio Della Rocca, Cardinal Ugo Poletti,
Edith Bruck, Settimia Spizzichino, the President of the Community of Rome Giacomo Saban,
the President of the Union of Italian Jewish Communities Tullia Zevi and Bondì Nahum. Tempio Maggiore in Rome, April 13, 1986.