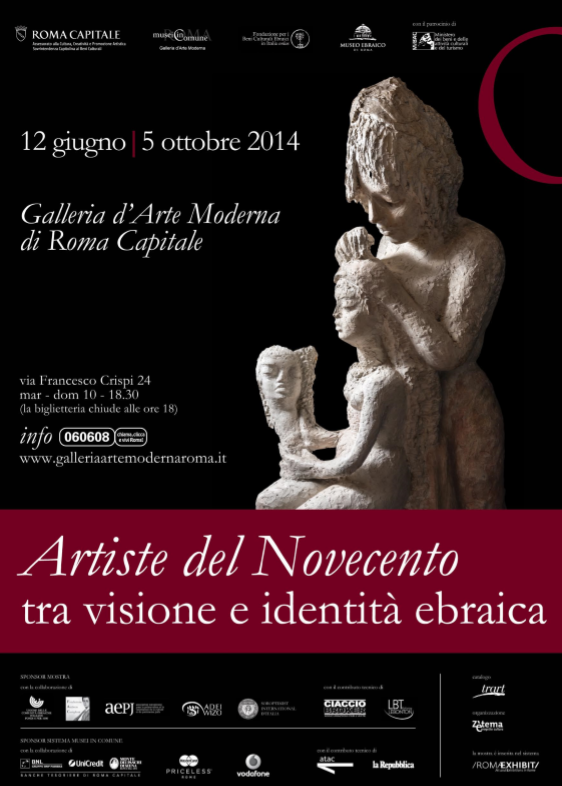 FEMALE ARTISTS OF THE 20TH CENTURY

BETWEEN VISION AND JEWISH IDENTITY

A reflection on identity

Made through 130 works by 14 Italian Jewish female artists,

Including some important and unpublished works from private collections

In the year in which the European Day of Jewish Culture (14th September 2014) presents the theme “Woman in Judaism”, the Gallery of Modern Art of Rome is offering the public an exhibition of about 130 works by Italian and Jewish female artists, which is a reflection on gender identity, and on the space and the role of women.

FEMALE ARTISTS THE TWENTIETH CENTURY, BETWEEN VISION AND JEWISH IDENTITY is an exhibition, curated by MARINA BAKOS, OLGA MELASECCHI and FEDERICA PIRANI, and promoted by the municipality of Rome, Department of Culture, Creativity and Artistic Promotion – Capitoline Superintendence for Cultural Heritage, by the Foundation for Jewish Cultural Heritage in Italy Onlus and from the Jewish Museum of Rome, from 11th  June to 9th  October 2014 that will be held at the Gallery of Modern Art in Rome, in via Francesco Crispi 24.

The exhibition aims to encourage and expand knowledge of a reality like the Jewish one, and to give the right emphasis to those experiences of women that have been able to transform a condition of social minority into a reason for affirmation and creative independence, thus contributing to enhance, together with their private dimension, also the cultural life of our country.

Together with a careful selection of works by ANTONIETTA RAPHAEL painter and sculptor, who was main character of the Roman School in via Cavour, there are the works of artists such as PAOLA CONSOLO, EVA FISCHER, GABRIELLA OREFFICE, ADRIANA PINCHERLE and SILVANA WEILLER. These works enrich the exhibition with different idioms and, especially, with unpublished works whose loan have been kindly offered by both private and public heirs, collectors, foundations and bodies.

The Roman artistic environment, that has only been partially researched on, is analyzed in this context also through the activity of other female Jewish artists who were active in the capital, at the beginning of the twentieth century. The rooms are indeed enriched by the production of CORINNA and OLGA MODIGLIANI, ANNIE and LILLY NATHAN, WANDA COEN BIAGINI, AMALIA GOLDMANN BESSO and PIERINA LEVI, some of whom were assiduous visitors to Giacomo Balla’s artistic studio.

In the installation, the works of the pupils of Balla and AMELIA ALMAGIÀ AMBRON, a close friend of the painter and his family, act as a corollary to two splendid portraits of the master: Portrait of the Mayor Nathan and Portrait of Amelia Ambron, loaned and shown to the public for the first time in this exhibition.

These works are examples of  quality production and constitute a first recognition that is hoped to be germinal for further studies in the field.

The resonance of the female voice, in the first half of the twentieth century, is generally very limited, and this is even truer for Jewish women. Penalized by belonging to a minority which in itself negatively affected their emergence on the cultural scene, they are united to the fate of their non-Jewish contemporaries by the prejudice, both unfounded and rooted, that man should be the only custodian of true professionalism.

The role that Jewish women have played over the centuries within Judaism leads them to a more secluded position in the social sphere as it is, however, central in the family reality. Not for this, they were absent or hesitant in taking on top-level initiatives on the cultural and artistic scene with the utmost competence.

By continually mediating between public and private life, between religious and national identity, they carried out their work essentially linked and in harmony with what was consolidating on the scene of the contemporary European culture.

Multilingualism and multiculturalism are values ​​that distinguish an attitude of knowledge that is free from prejudices, and is also typical of many other main characters on the artistic scene between the two wars.