The Jewish Museum of Rome presents in world preview the exhibition

The three canvases, commissioned by the Lawyer Giovanni Agnelli in memory of Primo Levi, will be on display from 9th May to 15th October

From Thursday 9th May until 15th October 2013 the Jewish Museum of Rome hosts the exhibition Survivor. Primo Levi in ​​the Larry Rivers’ portraits. For the first time, the three historical canvases, commissioned by Gianni Agnelli in memory of the writer from Turin are on display to the public. Since 2002 the portraits have been kept in Pinacoteca Agnelli in Turin, which is chaired by Ginevra Elkann, who granted this exceptional loan to remember Levi on the occasion of the tenth anniversary ​​of the death of the lawyer.

In 1987, immediately after Primo Levi’s tragic death, Gianni Agnelli, who had studied in the same high school as the writer in Turin, and of whom he was two years younger, commissioned Larry Rivers to paint his portrait to remember his figure and, at the same time, the extermination of Jewish people. Rivers, who had already studied the themes of the Shoah in previous years, made three large canvases, animating and theatricalizing Levi’s novels: Witness, Survivor and Periodic Table. The three paintings, which are still owned by the Agnelli family, as Ginevra Elkann informs us, “were brought to Italy and exhibited, by decision of the Lawyer, in the headquarters of La Stampa, the newspaper for which Primo Levi had written essays tales and Elzevirs on the Third Page since 1959, and in a more continuous form since 1968. My grandfather – as Ginevra Elkann recounts – decided to place Rivers’ paintings in a large room, situated on the ground floor in La Stampa headquarters, in Via Marenco 32. After placing the paintings, the room was commonly called room ‘Primo Levi’. It was not open to the public, but was used for the most important meetings and to welcome distinguished visitors for a first greeting or a welcome toast”.

When making the three paintings, now on loan at the Jewish Museum in Rome, Rivers mixed Primo Levi’s different identities: a Jew, a chemist, a partisan, a deported man, survivor of extermination and a writer. In order to express his vision of memory and death at his best, the artist used the “cancellation” technique in his drawings. He understood that the theme of cancellation was a perfect metaphor for the difficulty in transmitting the memory of the extermination by the survivors: the images of the past cannot be forgotten. Yet, at the same time, it is impossible to be able to fully communicate the tragedy to those who have not experienced it.

Rivers’ paintings are accompanied by some documents, which were kindly loaned by the Primo Levi International Center of Studies in Turin and by the Roman Institute for Italian History from Fascism to the Resistance – IRSIFAR.

During the exhibition period, the Jewish Culture Centre and the Kiryat Sefer bookshop will dedicate a series of meetings to Primo Levi. The International Jewish Literature and Culture Festival (20th -25th July) will also dedicate some events to the Italian writer. 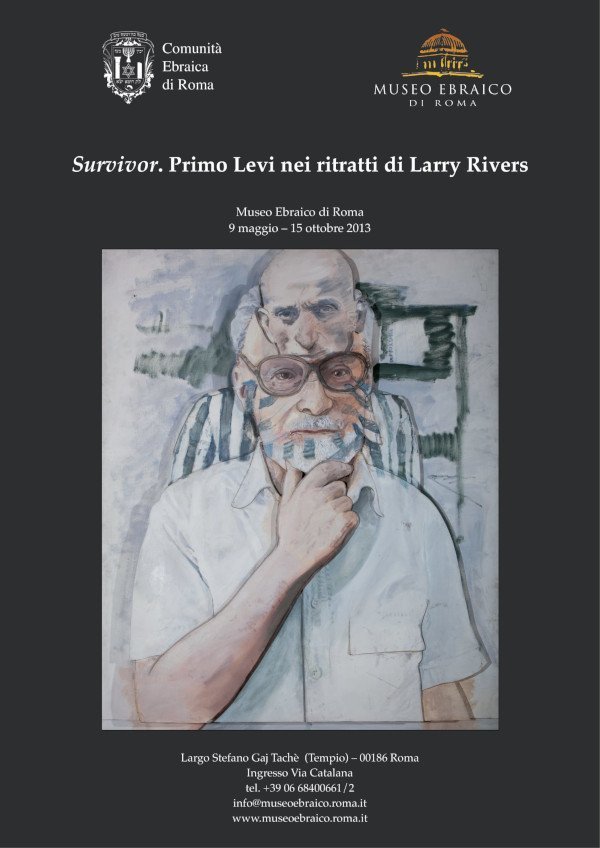