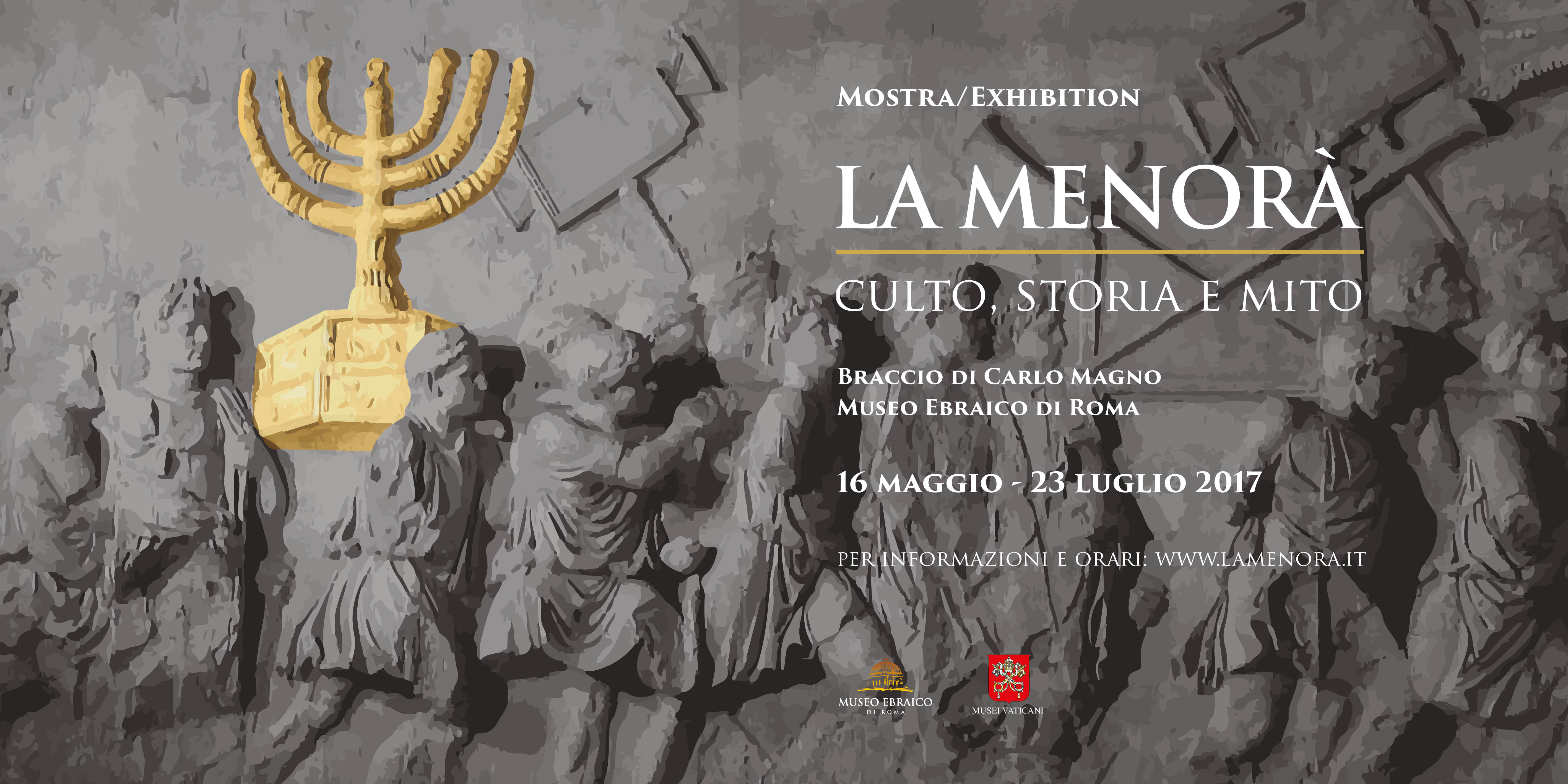 THE MENORAH: CULT, HISTORY AND MYTH

The exhibition involves, for the first time, the cooperation between the Vatican City State and the Jewish Community of Rome, launching an initiative of high institutional profile under the banner of unity, mutual understanding and inter-religious dialogue.

The exhibition tells, through figurative arts (there are approximately 130 works) the pluri-millennial, incredible and painful history of the Menorah: the seven-branched Candelabrum forged in pure gold by Moses at the express will of the Lord. As told in the book of Exodus, the Menorah had been placed in the first Temple in Jerusalem, together with the other sacred furnishings, in the name of the alliance with the people of Israel. This mythical lamp wandering through the centuries and in the most distant places – as it was for the Jewish people whose ancient destiny it is a symbol of – gives us back one of the most suggestive events in men history in the last three thousand years. A tale that is lost in history, myth and legend.

The exhibition recreates the gripping history of the Menorah through a rich journey, scattered with masterpieces and important works of art, ranging from antiquity to the 21st century and from sculpture to painting, from architectural furnishings to decorative arts, from manuscripts to medieval and renaissance book illustrations.

Rome is, inevitably, the predestined place to host this exhibition. It is indeed in the capital of the Roman Empire that the Menorah, inaugurating its long pilgrimage, arrived in the year 70 of the modern era, after the destruction of the Temple of Jerusalem. The destruction had been perpetrated by the Roman troops of Titus – as it is handed down by the famous relief of the homonymous arch erected in Rome, which was erected on the northern slopes of the Palatine- and from the tales of the historian Giuseppe Flavio, contained in the volumes of the Judaic War. The Menorah was brought in Rome with the triumph of the imperial troops, together with other sacred furnishings, which were stolen from the second Temple. This last was erected after the destruction of the First Temple by Nebuchadnezzar II of Babylon (586), before the modern era. With all probability, the first original Menorah, attributable to biblical story, was destroyed together with the Temple. It ended up as a trophy in the Templum Pacis built at the Forum to celebrate the victorious conclusion of the Jewish war.

But, above all, it was in Rome, in the middle of the imperial age, that the Menorah became the most powerful and representative symbol of Jewish culture and religion, at the same time in which the symbols of Christianity took their definitive form. Since then, having become an emblem of Judaism, a tangible evocation of  divine light, the cosmic order of creation and the ancient covenant, symbol of the burning bush, of the tree of life, or testimony of the biblical Saturday, the Menorah appeared everywhere, in East and in West: Jewish catacombs in Rome, sarcophagi, tomb inscriptions, graffiti, coins, gold decorated glass, jewelry and jewels. This enormous proliferation will be exhaustively displayed in the exhibition by unique works, divided according to chronological aspects, which from the first century of the modern era will reach the 20th, when the Menorah will appear on the coat of arms of the newborn state of Israel.

Rome is also the city where, in the fifth century, Menorah lost its historical traces forever, when it was raided by the Vandals of Genseric during the plunder in 455, perhaps it was transferred to Carthage and after – but this is not certain- to Constantinople. Since then, more and more shrouded in mystery, the Menorah disappeared forever, in spite of the thousand sagas that, over the centuries, have tried in vain to perpetuate its life. Since then, all stories relating to the seven-branched Candelabrum have turned into legend, with all those suggestive and daring variations, set between the Middle Ages and the twentieth century, which will be entirely displayed and evoked within the exhibition.

However, the exhibition will also address another, decisive aspect concerning the history of Menorah: in the Middle Ages, since precisely – and not casually- the Carolingian period, Christian art took up the forms of the Menorah very punctually for creating those seven-branched candelabra which were placed in many churches for liturgical purposes. Moreover, this essential chapter will be duly developed within the exhibition, thanks to the presence of some very important testimonies, which date back to the XIV and XV centuries, such as the monumental candelabra from the Sanctuary of Mentorella, the cathedral of Prato and that of Pistoia, up to two huge eighteenth century candelabra from Palma de Majorca (Museo Capitular, Catedral de Mallorca).

The exhibition, which will take place at the same time in the two sites Braccio di Carlo Magno in the Vatican Museums and the Jewish Museum in Rome, will present three large units, which are then split into further sections.

The first large nucleus consists of three sections (Displaying the Menorah; The Menorah in temples and in Jewish art: iconography and symbolism; The Menorah in ancient art from Jerusalem to Rome). Each section will recreate the History of Menorah from its ancient presence within the Temple of Jerusalem until its dispersion in Rome, that is, from antiquity to the first centuries of the modern era. The second nucleus is structured in four sections (From late antiquity to the fourteenth century; The Renaissance; The pictorial fortune from the seventeenth to the nineteenth century; The Menorah in Jewish applied arts from the late Middle Ages to the dawn of the twentieth century). It will pursue the myth of Menorah in time and space, from late antiquity to the threshold of the twentieth century, with a compelling and dense path of works of art and by analyzing -with particular attention – the appropriation of its forms by Christianity for creating ceremonial candelabra on the one hand and, from the other hand, its perpetuation as a strong and aggregating element of the Jewish world, culture and identity.

A series of paintings will trace the fortune of the Menorah throughout the centuries to modern times. From Renaissance, and until the end of the nineteenth century, the Menorah was often evoked in paintings because it was inextricably linked to the representation of the Temple of Jerusalem. The third nucleus is developed in a single large section (From the first post-war period to the 21st century). It will eventually offer a broad overview of the 20th and 21st century, through various portrayals of Menorah made by excellent artists. in an era in which de-structuring artistic language and visual semantics has given unprecedented expressive forms to this extraordinary symbol, which has also become the protagonist of masterpieces of twentieth-century literature such as The Buried Candelabrum by Stefan Zweig.

For this project, exceptional loans have been granted by the most prestigious national and international museum institutions. Among all – in addition to the Vatican Museums, the Jewish Museum in Rome and many other relevant Roman museums – the Louvre in Paris, the National Gallery in London, the Israel Museum and the National Library of Israel in Jerusalem, the Kunsthistorisches Museum and the Albertina in Vienna, the Kupferstichkabinett in Berlin, the Jewish Museum in New York, the Franz Hals Museum in Haarlem, the Sefardí Museum in Toledo, the Veneranda Biblioteca Ambrosiana in Milan, the Jewish museums in Padua, Florence, Naples and Casale Monferrato, the Archaeological Museum of Naples, the Palatine Library of Parma, the Opificio delle Pietre Dure in Florence. Among the displayed works there are wonders and surprising rarities, such as the large stone carved in bas-relief of the first century from the site of the ancient synagogue of Magdala in Galilee -found only a few years ago- very rare Roman-era glass decorated in gold, sarcophagi and tombstones from the Jewish catacombs of Rome, the Carolingian Bible of San Paolo, the imposing seven-branched candelabra dating from the fourteenth and fifteenth centuries, silver Roman Baroque, paintings by high artists such as Giulio Romano, Andrea Sacchi, Nicolas Poussin, Marc Chagall.

Finally, great importance will be given to the teaching equipment, to concretely involve children and young people of all ages in sharing knowledge, dialogue and mutual understanding.

The exhibition – for the realization of which, a working group of internationally renowned scholars has been set up – is curated, coordinated and directed by Arnold Nesselrath, delegate for the Scientific Departments and the Restoration Laboratories of the Vatican Museums, by Alessandra Di Castro, Director of the Jewish Museum of Rome, and by Francesco Leone, Associate Professor of History of Contemporary Art at the university “G. D’Annunzio “of Chieti-Pescara.