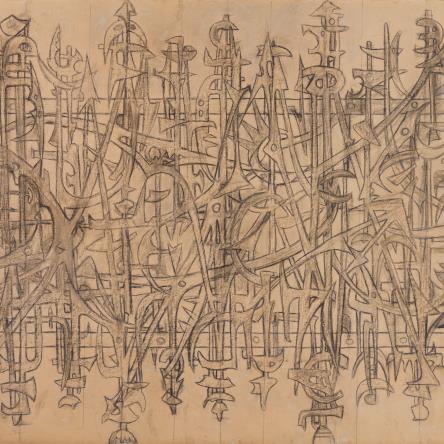 Mirko Basaldella. Sketch for the internal gate of the Fosse Ardeatine

On the occasion of Remembrance Day, the Jewish Museum of Rome hosts the sketch created in 1949 by Mirko Basaldella for the internal gate of the Fosse Ardeatine.

The large drawing (cm.181×291, copying pencil on lined paper), is a dense tangle of lines full of tension that recall the tragedy of extermination at the hands of the Nazi ferocity that struck the Roman people on March 24, 1944, when 335 innocent people were murdered in response to the partisan action of Via Rasella.

The memorial rises in the same place where the massacre was consummated. Opened in March 1949, the result of collaboration between the Roman architects Nello Aprile, Mario Fiorentino and Giuseppe Perugini, with the artists Mirko Basaldella and Francesco Coccia, it can be considered the first modern monument of republican Italy.

The sketch corresponds to the internal gate that encloses the cave of the massacre which is accessed after passing the external gate, similar in size and layout, while the entrance to the Mausoleum is marked by the fused bronze gate in 1950, the work of greater monumental commitment by the artist. From 1946, the date of the competition announced for the monument by the Ministry of Education, Mirko Basaldella elaborated a long series of preparatory studies that were ever more distant from the illustration and vice versa, more evocative and internalized than the event itself, overcoming hostility and foreclosures by those who , wanted a work of a realistic and obviously figurative nature. In fact, the bronze fences for the Fosse Ardeatine marked a turning point in the history of sculpture, not only Italian, for the original interpretation of the commemorative theme and for the close spatial dialogue on an architectural scale. The gate actually arrives at an aerial weave that translated into the monumentality of bronze “eliminates all veristic complacency and the sense of glorification is more evident and pure” (Reminder by Mirko Basaldella, 15/09/49).

Mirko Basaldella (Udine, 1910 – Cambridge, 1969). Brother of Dino and Afro Basaldella. A pupil of Arturo Martini, he moved to Rome in 1934 where he met the artists of the Roman School. In 1935 he made his debut at the Rome Quadriennale and in 1936 at the Venice Biennale, the year of his first solo exhibition at the Galleria della Cometa in Rome. He approaches the Cubist experience by starting structural and material research, in sculpture as in painting, presented in various solo shows in the USA, at the Knoedler Gallery and at the Catherine Viviano Gallery in New York. In 1955 he exhibited at Documenta in Kassel, he won the international prize at the III Biennale di San Paolo in Brazil, obtaining in 1957 a similar recognition in Carrara, in 1959 from the National Academy of Lincei in Rome, and in 1966 from the Roman Quadrennial. Since 1957 he directs the Design Workshop at Harvard University in Cambridge, while his research continues between figurative echoes of totemic suggestion and abstract forms. 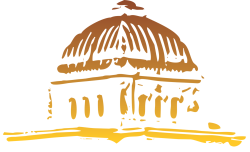